“Imagine all the people living life in peace” ~ John Lennon 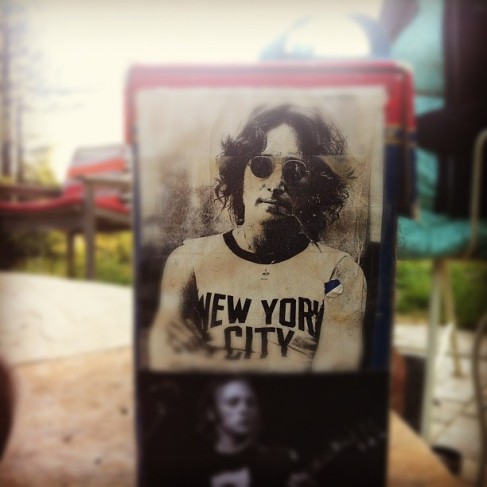 This is an updated edit from the post I made a year ago.  New photo thanks to Ted Mattison and his awesome lunch box.  Today, I sit next to my now ten-year old daughter and tell her the story of what happened on September 11, 2001.  Believe it or not, I have no longer kept the horrific details of that tragic day away from her.  She has learned of the terrorists, and she now understands there were horrible wars being fought on lands far away and she comprehends that America continues to fight a war on terrorism.  She also knows that the leader of these atrocities, Osama bin Laden, is dead.  Thank you, President Obama!

Do you remember where you were the morning of September 11?  Of course, you do.  We all do.  As I mentioned before, the cats were unusually restless and woke us at 6:00 a.m.  There was no small child yet; though the Bean was starting to sprout.  Those who know me understand that I will never willingly get out of bed at 6:00 a.m., however, on that day, I did.  The phone rang and I knew immediately it was not going to be good news.  It was my friend, Lisa, from D.C. calling, “turn on the news”.  The first tower had already been hit; and, Paula Zahn was announcing it was a small plane.  As she spoke, the view behind her was of the twin towers with smoke billowing out of the first.  I stared in disbelief; the unthinkable was approaching the second tower.  I watched, in real-time, as the jetliner smash into the second tower.  I thought how surreal life had just become.  I contemplated turning off the television.  I was one month pregnant with the  Bean in what I’ll simply describe as a very sensitive pregnancy.  This was so horrific and tragic, I didn’t want these emotions filtering through by body and soul.  As much as I thought I should, I didn’t turn off the television.  In fact, I could do nothing, but, watch for the next week.

On this day, I am now able to share with my now thriving 10 year old, the story of one victim that hit very close to home.  Our friend and contractor was at the house the morning of the attack.  He and I sat in silence waiting to hear the news.  His nephew was a financial planner for Cantor Fitzgerald.  He arrived every morning that week and we watched.  One morning, he called.  He would not be coming to the house today.  It had been confirmed, his nephew had been killed.  What hit me the hardest was that his nephew’s wife was also expecting.  Her now ten year old never got to meet her father.  I count my blessings every day.

My husband flew into D.C. last May, moments before President Obama made the announcement….Osama Bin Laden was dead.  Bryan was able to join the thousands of revelers just after midnight at the White House.  He described it as a moment of  beautiful mayhem that he will never forget.  Americans coming together in celebration that terror and evil did not prevail.

The Bean and I now have long talks about 9/11.  She has seen the images and watched the video of this horrific moment in time.  She is not afraid.  Based on what she shares with me I think she intends to be part of the change and forward momentum that America needs to make this country become again a place where people live in harmony and find and enjoy their freedoms.  Sounds corny, but, let’s see what happens!  Peace!