“You are a child of the universe no less than the trees and the stars; you have a right to be here.  And whether or not it is clear to you, no doubt the universe is unfolding as it should.” ~ Max Ehrmann

I have been planning for this photo series for many years and could not wait until the magic number “13”. I wanted to make portraits of my daughter and a group of her peers at the age of 13 and ask them each to write a letter to their future 18 year old self; their 2020 self.  However, the project wouldn’t end there. Each participant has agreed to meet me again in 2020 for another portrait/letter session, and perhaps again in 2025.

I began this project last summer, during their 13th year and asked that they write their letter before turning 14.  I have known most of these kids since their pre and elementary school days.  And, while 7 middle schools, 9 towns, and a countless number of sports teams, music groups and art programs now separate them, they have all remained friends or have become acquaintances.  The kids of the Silicon Valley all seem to know one another.

I’m thrilled to introduce this group of teens, each of whom I will have the privilege of documenting with photographs on their journey to 2020.  After each child’s name I’ve included one word their parents were asked to use to describe them when they entered preschool.  I look forward to watching them grow and witnessing the young adults they will become.  Godspeed! 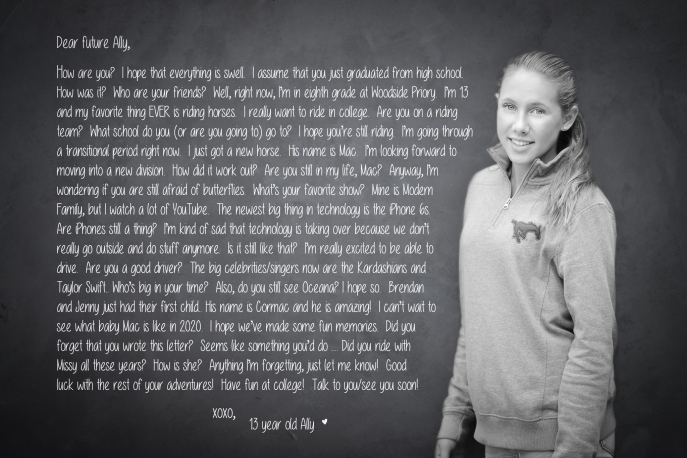